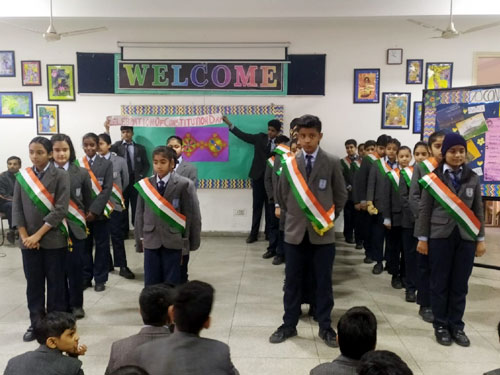 I like the religion that teaches Liberty, Equality, Fraternity by Dr. BR Ambedkar

To celebrate 70th constitution year, special morning assembly was conducted by Social Science Department on 9th January 2020 by students of classes 6th, 7th and 8th to instill a sense of patriotism and spread awareness about the Indian Constitution among the students.

The existence and successful survival of democracy in such diverse conditions is the most celebrated fact about our country and constitution is its backbone. To reinforce this students spoke about the background of our constitution, its features, the significance and importance of constitution in our country.

The flavour of tricolor should not be depicted only through our words but also through our actions .This worthy thought was followed by an oath on preamble taken by the students. The assembly ground echoed with the words "we the people of India..." and importance of being a socialist secular sovereign democratic republic country

The culmination of the ceremony was marked by a series of poems,speech, songs  which took us on a journey of our constitution from its history to its present form and its vital role in bringing together an idea called India. All the students held their hands to sing the Preamble song to imbibe the spirit of unity, love, respect for our country and celebrate the constitution as a living document.

On the completion of this program our honorable Principal Ruchika ma'am graced the audience with her thoughtful words, taking an interactive session with the students. She reiterated the fact that the constitution day is celebrated in a manner to celebrate the constitution as a living document capable of adapting itself to current situation. She apprised the students that it is an utmost important document for all citizens living in the country. The document which is considered as a supreme framework for political principles, procedures and powers of the government which has enlightened us with the most progressive values. The document without holding biases to any caste, religion or tribe gives all of us the right to live with liberty and equality.

She correlated the constitution of our country with the constitution of our school. She expressed her views about the diversity amongst students coming from different backgrounds, having different aims and goals but all students stand united by common MAHAVIRIAN GOALS, ETHOS AND VALUES.
To add more to this she ignited the brains of the students by giving them a home task to find what precautions are to be taken to make Indian constitution  successful and discussing the same with their teachers.

As a part of celebrating 70th Constitution Year, our students have also participated in online Constitution Quiz on MYGOV portal and has won certificates for the same. Their efforts are worth appreciating.

We extend our heartfelt thanks to Director sir, Principal Ruchika Ma'am, HOD Bhawna Ma'am for giving us this opportunity to be a part of this memorable celebration.