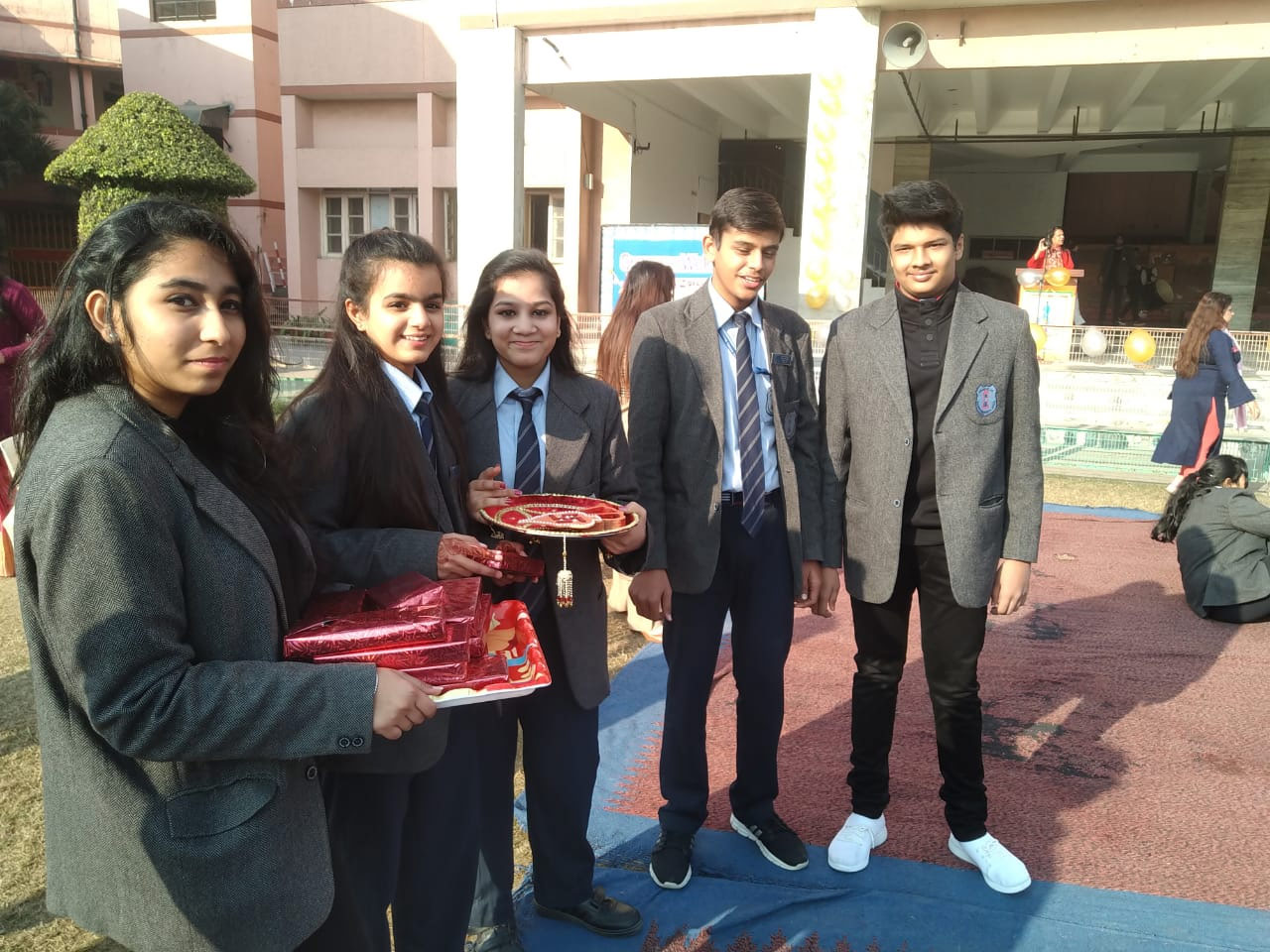 “Great is the art of beginning, but greater is the art of ending.” - Henry Wadsworth Longfellow
The students and mentors of class 11 (Ms. Geeta Kumar, Ms. Garima Madan and Ms. Palak Chadha) organized the *farewell ceremony for class 12 (batch 2019-2020) on 25th January, 2020 in the school ground. It was a morning of mixed emotions as a batch full of talented students is about to leave the school.

The learners sought blessings and initiated the event with Navkar Mantra. The entire stage was festooned with balloons and different posters which added to the flavour of the morning and were made keeping the *theme of the day in mind, “Yes, I am a dreamer”.

The seniors and all the staff members received a warm welcome from the juniors. It started with *Tilak Ceremony and Gift Distribution to class 12. The juniors put up a great show with a band performance where they highlighted the indispensable relationship flourished during the school, friendship. The performance included various songs on friendship sung in a melodious chorus with various instruments. The group dance performances where the juniors gave outstanding performances on modern Hindi movies songs were a feast to the eye. The juniors created an ambience of enjoyment and music for the seniors to enjoy their last memories in the school.

The seniors were also given various titles during the title distribution ceremony. There were about 21 titles like Mr. and Ms Khiladi, Jai Veeru, Mr. Photogenic and others. The titles of Mr. and Ms Mahavirian were given to Rishabh Nath Nagar and Divya Raghav. The title, Queen of Mahavira, was won by Khushi Bansal.

The occasion was graced by enlightening words from Director sir. He encouraged learners to reflect on their journey throughout the school and express their views in the way they have grown as social and individual beings.

The school observed the felicitation of the newly appointed Prefectorial Board and Student's Council  with a total of 17 posts. The former Head Boy and Head Girl of the school handed over the responsibilities by entrusting the school's flag  to the elected Head Boy, Ronak Sharma (XI-C) and Head Girl, Gunjan Bhatia(XI-A), for session 2020-2021. The team pledged to abide by the school's philosophy and uphold its good name by providing their dedicated ministration.

The Principal, Mrs. Ruchika Sukhija congratulated the designated team. She addressed the gathering by wishing a bright future to the seniors and appreciating the efforts of juniors in bringing about a commendable show. She went down the memory lane expressing how farewells always are full of mixed emotions and one of the most special memories for anyone associated with an institution as it is a conclusion to all of what they have put in making ourselves a part of it.

Further, the event was made memorable with the flashback memories that were shared by some seniors in the speech that created an emotional moment. The former Head Boy, Rishabh Nath Nagar and Head Girl, Khushi Bansal, also gave heart warming speeches and left all with moist eyes as they articulated the school's and teachers' contribution in shaping the entire set of learners.

The program ended with a vote of thanks by Ms. Bhawna Aggarwal which was followed by Dance and Lunch. A token of love was given by seniors through their hugs and happiness to juniors. All the teachers conveyed their best wishes to the students of class 12 for their upcoming board examination.