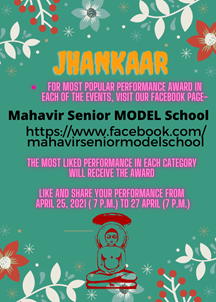 "Fight with yourself, why fight with external foes? He, who conquers himself through himself, will obtain happiness." - -Lord Mahavira

Mahavir Jayanti is the most important and auspicious festival of the Jains as it is marked to celebrate the birth of Lord Mahavir.

He was born in the 6th century in Bihar, to Queen Trishala and King Siddhartha.

Lord Mahavir was named Vardhaman, which means "one who grows," because of the increased prosperity in the kingdom at the time of his birth. While growing up, he showed interest in meditation. When he attained the age of 30, he took the spiritual path and left his throne to practice Jainism.

Devotees commemorate this religious festival in loving memory of the 24th Tirthankara of Jainism, who was the last spiritual leader.

We at MSMS have always strived and endeavored to follow the Principles of Lord Mahavira in our daily life and wish to imbibe the same in our students.

Every year MSMS celebrates MAHAVIR JAYANTI with great pomp and show. Though the celebrations were mellowed down due to COVID 19 pandemic yet it couldn't fade the enthusiasm in our hearts. Crisis give rise to new opportunities and open avenues. Since we couldn't have real performance and stage show MSMS gave a twist to the celebrations and decided to celebrate this auspicious day with the world outside by inviting the schools to participate in an online inter school competition 'JHANKAAR'

To celebrate the propitious occasion of Mahavir Jayanti MSMS organized an online inter school competition ' Jhankaar'.
Participating schools had to send their entries in two categories.

SUR SUDHA:  SOLO SINGING COMPETITION
Participating school had to send one solo song video of the student on any traditional devotional song.

Mrs Venu Garg, HOD music department and her team judged the performances on the basis of :

MOST POPULAR PERFORMANCE :
All the performances were posted on the Facebook Page of MSMS.
Ridhima Gupta (class 8) Sunbeam School, Varuna got maximum likes ( 274) from the viewers and was so her performance was chosen as the Most Popular Performance. Awarding the following titles to promising dancers in the making co - judges Mr Harish Verma and Mrs Poonam Verma judged the students on the basis of : "Do not injure, abuse, oppress, enslave, insult, torment, torture, or kill any creature or living being." - Lord Mahavir